Virtual reality technology is no longer considered something new or unusual.

But in medicine, it has appeared relatively recently and is quite firmly strengthening its positions in this area. Devices increase the quality of work of doctors. This is very serious, considering that according to a report by the U.S. Institute of Medicine, about 10 thousand people die every year from medical errors in America alone.

Virtual reality technologies are already involved in different areas of medicine. Incredibly important is the process of training healthcare staff by using VR. Weill Cornell College of Medicine (New York, USA) has a virtual reality room in which a simulator for surgeons is installed. No practice on corpses, not to mention living patients! 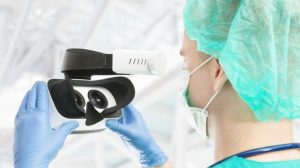 The system is equipped not only with a graphic headset, but also with tactile feedback. The doctor feels a mechanical effect on the organs of the “patient”. With the help of such a simulator, it is possible at a much lower cost to acquire the skills necessary for the successful completion of operations.

There is a similar simulator for dentists. At the University of Aachen (Germany), students learn to do local anesthesia on a similar simulator. According to the scan data, tissues with appropriate parameters are modeled. After that, the graphics and tactile feedback system enable the future specialist to feel the injection site, feeling at the same time everything that happens after each needle movement. And then enable the student to check to see if he’s hit a needed nerve.

In psychiatry, virtual reality is used on the principle “in order to understand the patient, you must see the world through his eyes.” For this, the Mindscape program from Viscira has been developed. It is intended not only for students but also for relatives of the patient so that they better understand how a person lives with the productive symptoms of schizophrenia: impaired thinking, auditory hallucinations, delirium.

Virtual reality helps not only in training but also in preparation for a specific operation. The doctor can see three-dimensional images taken by x-ray, ultrasound or tomography in special glasses. And it helps to plan actions better. If we are talking about surgery, then we must say about the “four-armed” Da Vinci robot, with the help of which doctors sitting with their backs to the patient behind devices with 3D glasses and joysticks perform an operation.

At the Institute of Creative Technologies (Southern California, USA), virtual reality helps veterans get rid of post-traumatic syndrome. A case is known when one of the former commandos suffered severely because he was sure that he did not do everything to save his comrade. Doctors reproduced a real-life scene in which the patient was convinced – he did everything he could by using a shooter. His condition has improved significantly.

In addition, virtual reality cures phobias. With the HITlab Spider World program, people learn to overcome the panic fear of spiders. And the SnowWorld app allows you to throw snowballs at penguins in a “winter” surrounding. This reduces pain in those who have burns.

Of course, today, even in the USA, only 1% of students study on VR simulators. But we are talking about the future. And, judging by what successes are already there, the possibilities of virtual reality in medicine are innumerable. And augmented reality, which will analyze what is happening, will help simplify the diagnosis and treatment of patients, reducing the likelihood of medical errors.

What is user story?